Eat and Drink in Alicante

The beautiful city of Alicante includes a diverse range of places to eat including restaurants, cafes, bars and pubs all serving a great selection of food and drink from typical English cuisine, international and traditional Spanish or Mediterranean cuisine.

As with most Spanish towns and cities, Alicante boasts an impressive range of restaurants offering cuisine from around the world, Turkish, Moroccan, French, Thai and Indian to name but a few! But surely the first priority is to sample the local gastronomic delights and this you can do in the wealth of restaurants and cafes scattered around the city.

Tapas are now served worldwide, but did you know that their origins started in Alicante? Montaditos are little delicacies placed on a slice of crusty bread which were given free to travellers of old to accompany their wine or beer – a custom which still survives in some bars like the Meson de Labradores on the street of the same name, Calle Labradores.

Grilled red mullet in oil, garlic and parsley, cured sausages produced in the nearby mountains, fish stew bursting with saffron, a tasty broth called oleta, or sardines simply grilled on the BBQ and washed down with a chilled white wine.

For a light lunch try one of the many fresh salads encompassing such delights as mojama (salted tuna), marrajo (shark) and, if you're fortunate, you may find caviar Alicantino (herring's roe spread with butter) a fabulous dish that has almost been lost.

This typical Spanish restaurant also includes a Tapas bar. It is located in the city centre behind the Town Hall and therefore is easily accessible for tourists as well as locals. The menu comprises of a fine choice of meats and seafood such as lamb, steak, calamari and prawns.
Read More 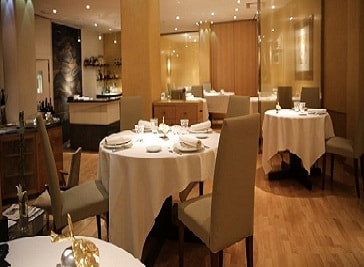